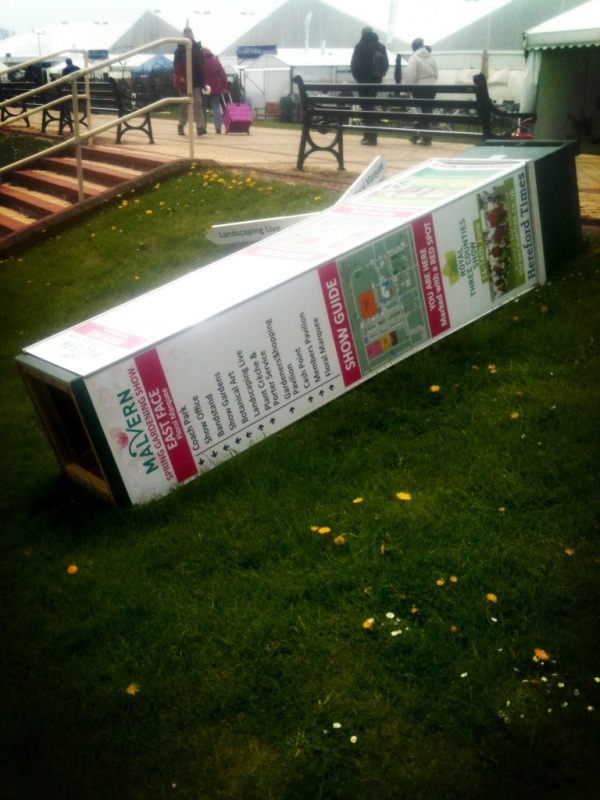 It was windy, very windy in-fact.   I saw ground staff laying these info towers down all over the show ground in order to prevent anybody being squashed.

This was my second ever visit to the Spring show, last year being my first.  I’ve been to the Autumn Show a couple of times in the past, which is more aimed at a Produce Show, Giant Veg and Cider.!  I find the Spring Show has more Nurseries and plants for sale, although that just could be my perception.

I visited on the first day which was a Thursday, I’d booked the day off work and the following Friday off so I could recover/plant my purchases.

By a happy coincidence I’d purchased a newer car in the days leading up to the show and collected it the night before I set off to Malvern.

4 motorways and lots of traffic later I arrived just after opening, ! was parked up next to one of the entrances, with the loos next to me.  Perfect.

Due to the high winds I set off straight to the Floral Marquee in fear of the organisers closing the show early due to public safety.

I only took a few pictures throughout the day, because carry a big camera is not really ideal.

I’ve never seen a Rose like this before, it was quite stunning, but not every ones cup-of-tea.

In the Wye Hall the Alpine Garden Society had a big display and a planted Trough Competition.  I took this picture for inspiration with the Trough I was bought at Christmas.

This type of planting is in the Miniature Garden section, the dish has to be a set diameter and depth, and the trick is to get as many plants growing well and looking established as possible.

Also in the Wye Hall there was the open garden competition, where gardeners can enter their grasses in various classes, the above was a tray of mixed cacti.

There were plenty of nurseries with some excellent displays of the plants they had for sale, but it’s always the way that they have a plant in their display that they don’t have for sale, these are the plants I always seen to want.!

The above is one such plant that I took a shine to, the nursery did not have any available to sell, but in hindsight it was probably a good thing, as I don’t have the damp, rich fertile soil in semi shade that the plant needs.

Stunning Delphiniums by Blackmoore and Langdon.

Another plant I really liked, but don’t have the right conditions for.

I always like to check out any Carnivorous Plant stands in attendance, although I rarely buy any plants now, due to lack of space.

They were nice though.

Before I got to Malvern, I had a wish list of plants I would like to find and perhaps purchase,  In the end I found plants I was looking for and Purchased Podophyllum ‘spotty dotty, which just about everybody appeared to be selling, a very nice pale peach Lathyrus Vernus ‘Dama Emily’ also Aquilegia viridiflora, also Penstemon Strawberries and Cream and will be used for cuttings as well as being planted out.  A few Fuchsias, and a couple of Cannas as well.

I purchased Echium wildpretii and Echium candicans, but these are likely to flower next year, so over wintering should be a challenge.!

I also purchased several nice Alpine Plants which will be used in raffle prized at my local groups AGM which is in a few weeks time.

All in all I think I was quite restrained in my purchases, might have had something to do with buying a new car a few days before the show.

One of the frustrating things that I saw were the many plant sellers who were located on the outskirts of the show ground  selling large plants stuffed in small pots cheaply, these plants in my experience are of poor quality and more likely to be seen on market stalls.

The plants are often straight off a lorry from Holland, and sold with little or incorrect information.

Annual plants tied up tightly, sold as ‘quality’ garden plants. Really gets on my nerves, and the most popular plant I’ve seen sold this way is the Lady Bird Poppy.

You can buy a packet of Ladybird poppy seeds for £1.99 and have over 200 seeds…. like I have, and will be planting out my seedlings soon.

Because of the late spring there were still lots of spring bulbs to see in the floral marquee, the main plant being the Tulip.

Outside in the show ground there were lots of stalls selling ‘tat’ Wind chimes, double glazing, foot massaging machines, however I did spot some splendid little creatures that looked happy….

I resisted the urge to buy any, but I did see a couple of interesting sculptures that might look good if I wanted to annoy my neighbours…

It started to spit with rain around 1.30pm, so I decided to have 1 last look in the floral marquee before setting off home through the rush hour…

After 3 trips back to the car to drop off my purchases and have a few paracetamol I headed home happy and with aching feet.

My new car was fab, and so was the day.

Next show should be Gardeners World Live 2013  I had better get saving up. 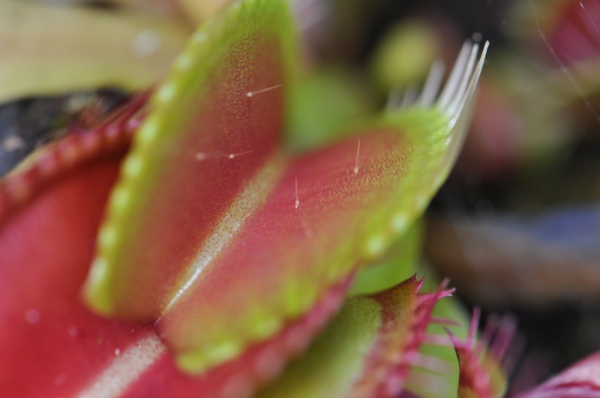 The promise of sunshine for weekend did not disappoint.
A cold start turned into quite a sunny day.