A different monthly view of the Garden throughout 2018

Late 2017 or similar someone on social media mused how interesting it would be to take a picture of your garden from the same spot but on the first of each month or as near as.

At first I thought it wouldn’t be interesting to anyone, let alone show much happening, but I played along and on the first of every month, or as near as, due to dark winter days when I’m at work during thee only daylight,  starting with January 2018 I stood on the same patio slab and faithfully took the same photo of my garden, warts and all, the resulting 12 photographs revealed to me just how much plant growth actually happens without me observing too closely whats actually happening.

Cold, wet with sunny days, the lawn is squelchy so not much actual gardening takes place, a few hours are snatched during weekends when it’s not raining. In the direct centre of the picture, below the Conifer my old shed may be observed, it leaks, it leans… its days are numbered.

Enviromesh tunnels cover an already roping looking crop of a few Leeks and Garlic,  and Onion sets which were planted out months earlier. Two patio fruit Trees have arrived and await potting up into something more suitable.

Longer days have arrived, but not by much, the ground is still sodden, some snowdrops have started to appear. The Patio Fruits Trees have been potted up, but await relocating to their preferred home within the garden.  My Hamamelis intermedia ‘Magic Fire’ is flowering. My old shed has vanished and a burning drum has appeared. Also a random word has cropped up in the middle of the picture. The lawn is not growing. 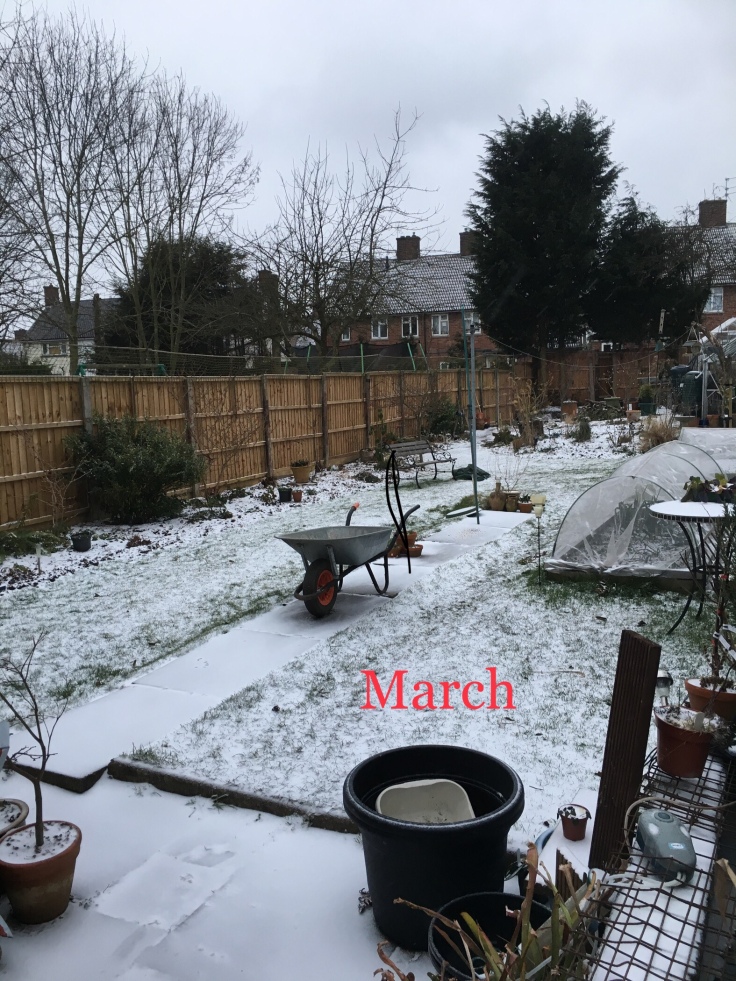 The beginning of March gave us a dusting of snow, however the rest of March gave us about a foot of snow. I left a wheelbarrow out overnight after using it to help move my big potted Tree Fern into my cold greenhouse for extra protection. There is still no appearance of a new shed, the newly potted patio fruit trees have been randomly placed on my long border next to the fence. The only activities within the garden this month were topping up bird feeders, and clearing snow away from the back door to the bin. The lawn was not mown. March was a savage month. 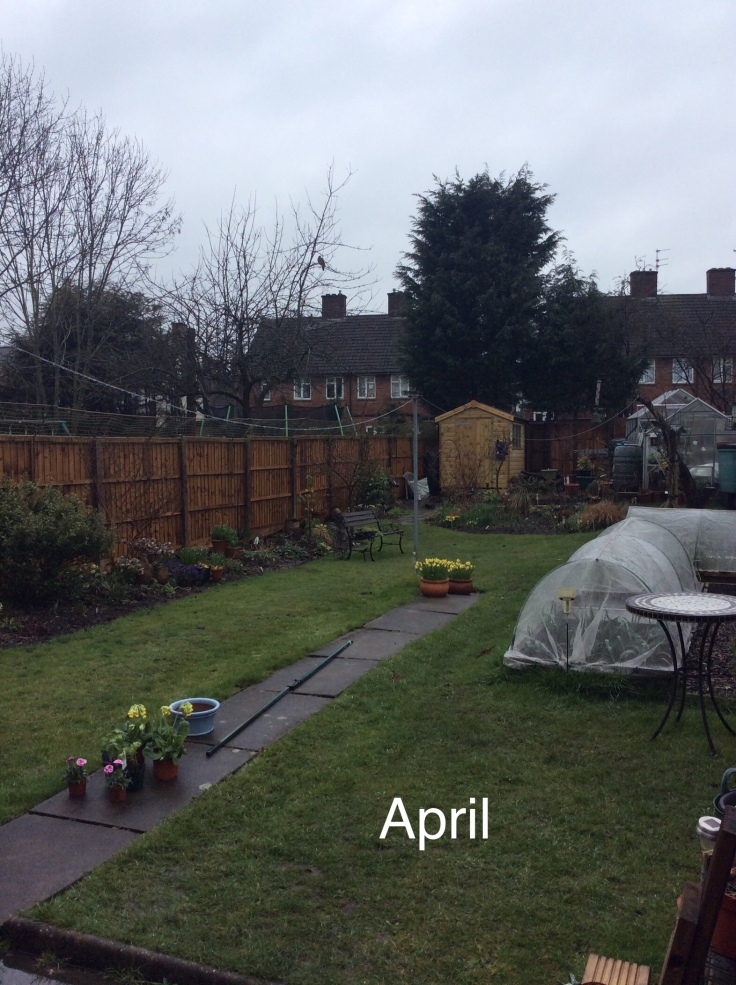 The month of April finally came round and some action started in the garden, most notably the addition of quite a posh shed if I do say myself, I paid for a fully fitted, high quality shed from a local firm, it needs to be top-notch storage as we don’t have a garage, or anywhere to put a garage, so the shed stores gardening tools etc. At this time I was unable to decide on a final colour. Also several of my pots burst into flower so I was finally able to see where I had planted my Narcissus Tete aTete. Hellebores begin to flower in my long fence border, A fat pigeon sat in my neighbours Cherry Trees giving my the eyeball. I purchased a few Primula veris and a couple of small Dianthus from a local nursery. The lawn got mown.

May came arrived speedily with a surge in plant growth, the shed remained unpainted, I designed and built a hedgehog feeding station, pots of Acer’s burst into growth, I had still not planted my Primula of Dianthus,  blossom arrived in an agreeable fashion, the fat wood-pigeon flew away, I moved pots around in a random fashion. The lawn got mowed again.

Sunshine! My Succulents got moved outside to soak up some sunshine, and promptly fired. I’m still undecided on the shed colour. I planted up troughs ready to place around the front of the house, the borders quickly filled up to bursting. Giant Alliums looked amazing, I put up my garden umbrella with the illusion that I sat down at some point. I moved the hedgehog feeding station due to incompetent wood-pigeons raiding the food. Neighbouring trees filled with leaf. The lawn mowing happened with regularity.  The Garlic plants in the Enviromesh tunnel really need pulling.

Heat.! Relentless heat… well summer. The scorched succulent was moved into deep shade, pots of plants were purchased from RHS shows and still need planting, lots of container watering took place. the mowing slowed down due to a dry lawn, the Garlic was pulled and dried, and Dwarf french beans were planted in their place and grew briskly. The Hedgehog feeding station returned with anti pigeon modifications. Sweetcorn grew tall. The shed still unpainted, still a job to do before wetter weather. Watering dominated the garden.

The garden fried in July into August, the lawn was not mowed, borders filled out, containers and pots overflowed with growth, veg crops grew with speed, beans, sweetcorn and salad crops were watered daily, borders started to fry. The neighbours cat kept raiding the Hedgehog feeding station after being taught how to by the annoying pigeon. It was too hot to spend any quality time out in the garden. It had to fend for itself unless I was watering. The Shed nearly got painted.

In September we had cooler days and some rain. The garden looked tired and fed up. I gave up with the Hedgehog Feeding station for now. Dwarf French Beans flopped over full of Bean pods for harvesting, My yellow Kniphofia flowered, The lawn was regularly mowed. Pots and containers looked tired and finished. The shed starts to stand out more now that vegetation is receding. Thoughts turn to winter and tidying up.

Cutting back, and clearing away those plants which have decidedly finished, dominated the month of October. The Sweetcorn, Beans, Carrots and other edibles were harvested and cleared away.  Gaps start to appear in borders and beds. Containers have been emptied.  The leaves on my Hamamelis Mollis start its yellow autumn colour. The ground either side of my washing line path has shrunken alarmingly, as the surrounding ground is clay, and the sunken part is turfed over narrow border with real soil in it. The shed has not vanished, it has in fact been painted in a boring dark brown wood preserver. although a high quality preserver, none of that discount shop rubbish, but the sort of waxy coating – dark preserver that takes ages to scrub off one’s forehead. 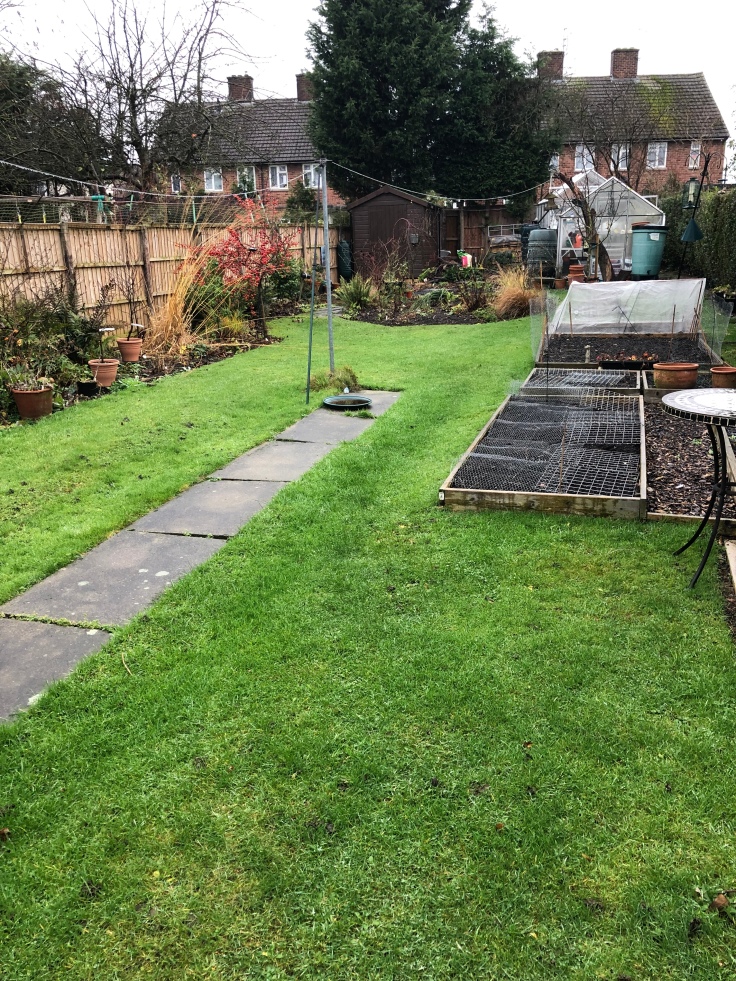 November arrived with wind and rain, as a result all the deciduous leaves left the area. The lawn still got mowed when the weather allowed. The Deciduous Molinia grass looked Golden, and battered. The Crab Apple looked splendid  and red, and short in height. The untidy areas of the garden ended up in full view of the house, and I had to cover my empty veg beds with mesh and wire to prevent neighbouring cat toileting. Tulips were planted as were more Giant Alliums. 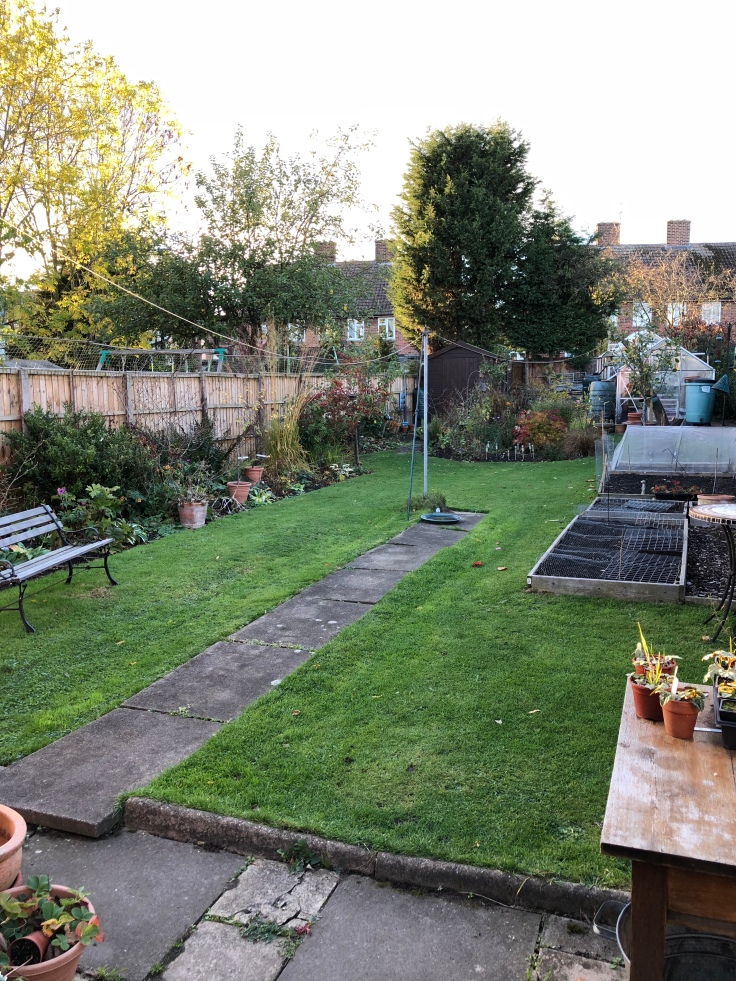 December finally arrived, winter rains watered the ground, and most plants recovered from the hot summer. Shallots got planted under the mesh in the veg patch, a bit of tidying and leaf clearing was done.  But shorter daylight hours, and wet weather at weekends have resulted in inactivity in general. A time to look back, take stock and plan for the next growing season.

5 thoughts on “Same place, Different time. A different monthly view of the Garden throughout 2018”